CELEBRATING OUR LOVE OF THE HORSE

Brought to you by 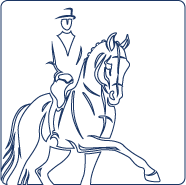 *plus Grand Prix scores from any other official competitive event.